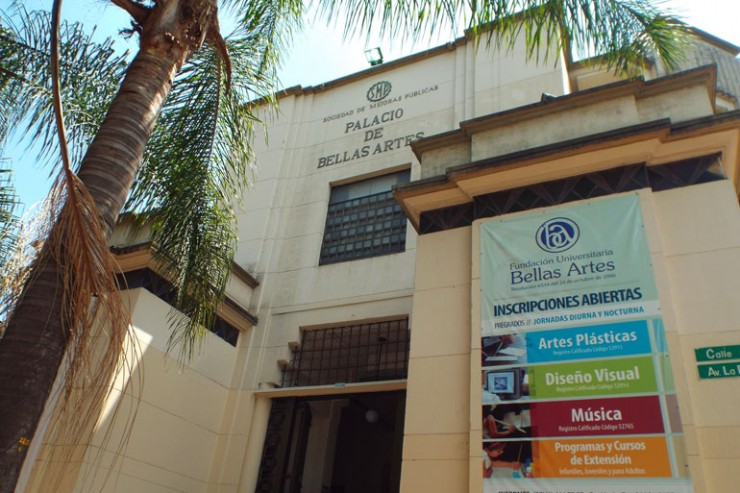 The Palace of Fine Arts (Palacio de Bellas Artes), designed and built in 1925, is a classic building among a mixture of modern homes on one of the busiest and, in the past, most exclusive, roads in downtown Medellin.

Designed pro-bono by Architect Nel Rodriguez, the Palace of Fine Arts is a Colombian National Monument and Heritage Center for Arts & Culture.

In 2003, it became home to the Fine Arts University Foundation with space for artists, designers and musicians.

Dramatic from the outside, the Palace of Fine Arts was built in a republican-style which came over from England and France around the time of the First World War. With its octagonal centerpiece, the clean lines of the building stand out from the somewhat haphazard architecture which surrounds it giving a feeling of grandeur and history.

However it is not only from the outside that this building is an architectural gem. The Beethoven Hall, the oldest concert hall in the city, is a magical place inside the Palace where eight huge scenes done by oil painting master Eladio Vélez cover the walls, combining music and art.

Other examples of outstanding students include Eladio Velez, Rodrigo Arenas Betancur, Debora Arango and Teresita Gomez, many of who have then gone on to teach workshops at the Institute.

Furthermore, the Palace can also boast to have been the sit of the composition of the Colombian national anthem. There is, in fact, a bust of the composer, Oreste Sindici, within the palace in memory of the historic event.

The Palace of Fine Arts hosts concerts, exhibitions, films and forums, with free admission for all.

Opening Hours: Monday – Friday from 8AM -6PM, Saturdays from 8AM-12PM